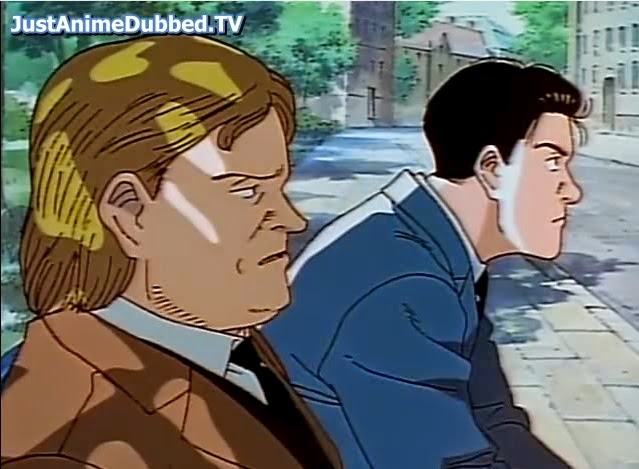 
A group of men trail a woman through a busy marketplace as a man watching via closed security cameras.  The woman’s name is Rosa Raine and she is with a man named Fredrick Hoffman.  As the woman buys her groceries and walks away we see a familiar face slowly trail her.  Keaton is on the scene but the team realize he is not a member of the Red Army, nor is he a bounty hunter; our man watching the video feed even goes so far as to call him an amateur and calls off his men as Keaton has “ruined” their chances at following Rosa and gathering any information.


Keaton is apprehended by the group of bounty hunters and “invited” to tea.  Keaton remarks on the man in charge’s dog (a pointer) and introduces himself.  It’s at this point that we finally get Keaton’s full name:  Taichi Hiraga-Keaton.  If you’re wondering why Keaton has two names it’s something that comes up in a later episode.  To put it quickly Taichi if half English and half Japanese, his mother is a well-born (I believe the manga states she’s a Duchess) Englishwoman named Patricia Keaton and Keaton’s father is a Japanese zoologist named Taihei Hiraga.  Keaton’s parents separated when Keaton was five and Keaton moved with his mother to where he was raised.  Anyway back to plot Keaton tells the men that he is on assignment by Lloyds of London to investigate Rosa Raine.  Keaton plays dumb and acts surprised that bounty hunters actually exist (because even if we’ve only had one episode we know Keaton isn’t stupid…sometimes absent minded yes, but not an idiot).


is a high ranking official in the German Red Army who has participated in several terrorist attacks and is the highest ranking woman on the Most Wanted List.  The bounty hunter group believes an operation like this is too dangerous for a meek insurance agent and tries to send Keaton packing.  Keaton drops the bombshell that has grown tired of the Red Army and is trying to get out with help from her family, who hired Keaton to investigate the claims.  Keaton and the group talk about how the group is gathering information on and several other high profile targets with the group demanding Keaton to stay out of their way.  They state that Keaton is an amateur far out of his league that can’t handle himself when presented with a problem…we’ve seen before that Keaton can handle himself so viewers can bet the bounty hunters will be surprised when they actually see what Keaton can do.  Keaton however backs out peacefully and praises their equipment setup before hinting that there are actually eight men in their group and not seven as we’ve seen up until now.  The group is surprised at Keaton’s insight and the leader asks one of the men to keep an eye on Keaton so he won’t meddle in their affairs.


We cut to the group of bounty men trailing a man named Thomas Mueller who seems to be aware he’s being followed as he evades the first of the group and a second starts a new tail on him.  We cut to two more of the men as they sit outside a safe house and spy a man name Augusto Eckhart has arrived to join Rosa, Mueller, and Hoffman have all joined the safe house.  Walter (the second man that was tailing Mueller) is outside the safe house in a grove of trees keeping a closer watch on the building when he sees Keaton sitting on a bench a street over innocently reading a newspaper.  The man, John, that was supposed to keep an eye on Keaton was fooled by him and lost his target.  This, as you can imagine, pisses off the guy in charge of the whole operation (his name will be given shortly) and he goes himself to talk with Keaton.


Keaton nonchalantly greets the man and asks him if he was given the nickname The Little Giant.  Apparently there was an inspector from Scotland Yard called The Little Giant whom was considered quite the genius, his real name was apparently Pittock.  Seven years ago Pittock quit his job when trouble arose.  Keaton remarks that Pittock might be trying to capture a man named Heinz Becker, a man among the most wanted of the world’s terrorists.  Keaton reveals that Rosa’s family has contacted Lloyds of London and told them that will be tortured for her betrayal of the Red Army.  Becker also has a nickname, the Hanging Judge, and will be murdered if he arrives at the safe house.  Pittock assures Keaton they his group will call the authorities before that happens and he warns Keaton not to go anywhere near the safe house.  Keaton warns Pittock about a horrendous flaw in their stake out, the area Walter is stationed in is incredibly open and he is vulnerable if the fugitives realize someone is there.  Pittock mocks Keaton saying a mouse is giving the cat advice, and bids Keaton farewell.


Back with the rest of the men Becker has yet to arrive and they remark that he seems to be a cautious character.  They check in with Walter who has grown bored waiting with no action.  Walter is ambushed by Becker and taken captive.  The fugitives send a taped message to Pittock and the bounty men where Walter tells them he has been captured but will be let go if the team doesn’t alert the authorities.  Pittock and his team plan a rescue, and find an old abandoned house they can use as a simulation.  Pittock remarks that when it comes to taking on this group of terrorists he and his men are the amateurs.  We then cut to the men running a rescue drill.  From the first shot to the men moving in takes only 24 seconds, Pittock remarks that it’s not a bad job.  The group decides they should attack during dinner, when everyone is gathered on the first floor and will have little to no time to react to their intrusion.  Keaton meanders upon the group training and offers his assistance.  Keaton says he can climb up to the floor above the dining room, where Rosa and Walter are being held, and rescue the hostages while the main team ambush the fugitives as they sit down to dinner.  Pittock shockingly allows for Keaton’s help, whether it is because he has lingering doubts about Keaton’s “amateur” status at this point we're unawares.


Pittock tells Keaton the real reason he resigned from Scotland Yard is because on an operation seven years ago at a nightclub in Soho Pittock and a group of officers went in to stop a drug trafficking group.  Pittock had a rookie with “a heart as small as a rabbit” who disregarded an order to not pull any firearms until the drug transaction was in progress.  The rookie pulled his gun and started firing, when all was said and done two officers and an innocent bystander were dead and the drug trafficker had escaped.  Pittock vowed then never to work with amateurs and amassed the team he has today.  Pittock tells Keaton their exact plan for the rescue taking place tomorrow and Keaton again surprises the group by telling them they’d have much better luck and ease bashing in the door (thus shaving precious seconds off their time) if they used the shotgun and blasted the hinges of the door…not the locks as they had been told by a “field expert” to do.  Keaton informs Pittock of how the men are armed, which again surprises Pittock.  Pittock orders one of his men to run a background check on Keaton as he “may not be an amateur after all.”


At the time of the rescue Pittock and his men suspect Keaton has chickened out as it is ten minutes until the operation starts only for Keaton to arrive in a cherry picker truck so that he can reach the second story with ease.  Keaton jumps the gun and crashes the bucket through the window a full minute before he was supposed to; making the team think he panicked.  Pittock and his men storm the building completely catching the fugitives off guard, thanks to Keaton actually getting the drop on them via his headstart, and Rosa and Walter are successfully rescued.  We then cut to Pittock and his men at the hospital visiting Walter where they again bump into Keaton.  Pittock actually compliments Keaton on his brilliant planning and strategy.  Keaton reveals that has turned herself in to the authorities and Pittock and his men reveal they received their reward but were also reprimanded.  Keaton is genuinely shocked that they group would get a reprimand when they captured all the terrorists and saved the lives of the hostages.  Pittock merely laughs and continues up to Walter’s room where he reveals to the group the information he was able to find on Keaton.  We, as well as the rest of the team, discover a little more about Keaton’s backstory.  As an adult, he studied archeology at , and after leaving , Keaton joined the British Army and became a member of the SAS, reaching the rank of master sergeant and seeing combat in the Falklands War and as one of the team members that responded to the Iranian Embassy incident.  So it’s safe to say that Keaton is no stranger to shadowing targets and hostage situations (something we’ll find out more in a later Case).


So final episodes thoughts?  Overall this is, to me, a much better and more interesting episode than Case 1.  Case 1, while exciting, seemed to be at this odd standstill (sort of inline with the village, and the remarks that Sofia and Keaton have about it standing still as time moves on) whereas this episode had much more going on in it.  We got to meet a more dynamic set of characters who were much more action oriented all whilst slowly learning more about Keaton’s skills and past.  Pittock is also an interesting character that, like most in the series, we never see again.  In a way I find that kind of sad as I would have loved to have seen him pop up in one of the later episodes of the series (there are certainly a few number of characters Keaton runs into where Pittock and his team’s presence wouldn’t have been odd to see) and actually show us just what he himself is made of.  Why was Pittock called The Little Giant, other than his short stature?  What skills made him so renowned?  What did Scotland Yard think of his leaving and what he does now?
We also very quickly see Daniel again driving the cherry picker truck but we don’t get anything with his character.  Don’t worry, we’ll get more on Daniel later trust me.
Posted by Alc Fluteo at 10:46 AM