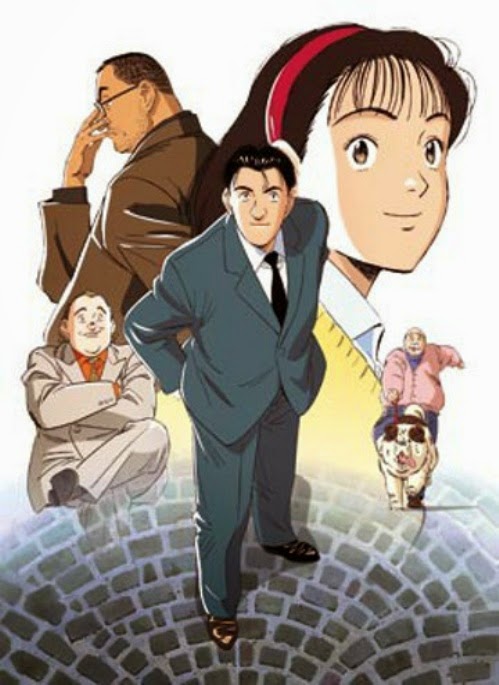 Master Keaton is a Japanese manga series created by Hokusei Katsuhika and Naoki Urasawa (though disputes as to the real creator have sprung up time and again over the years).  The manga was serialized in Big Comic Original between 1988 and 1994 and ran for 144 chapters.  The anime adaptation was created with 24 episodes airing between October 1998 and March 1999 in on Nippon Television.  An additional 15 episodes were created and released as OVAs airing between December 1999 and June 2000, bringing the total to 39 episodes.  The manga's target audience was Japanese men in their 20's and 30's, a comparatively older target audience than is common for most anime series.


The anime and OVA series were dubbed into English and released by Pioneer Entertainment and are sadly long since out of print.  You can still find the singles floating around Amazon but sadly the series has never been license rescued by any current distributors, even with the success of Urasawa’s other title Monster here in the .  received a Blu-Ray box set including both the anime and OVAs in 2011.


In 2012 Naoki Urasawa wrote a sequel to the manga titled Master Keaton Remaster which takes place 20 years after the original series ended.  I’m unable to really get more information on Remaster.  All the information I can find from Wikipedia (yes I know Wikipedia isn’t exactly a reliable source but they’re really the only ones with any concrete data I can find) states that Remaster is one volume long and ran from March 2012 until August 2014.  There's no listing of the number of chapters, but all of the scanlations I have found (and read) only have 4 chapters posted.


Hokusei Katsushika is a pseudonym of Japanese manga story writer (not an artist) Hajime Kimura, who was also a co-writer of Golgo 13.  Originally, Kimura created the series' story, while Urasawa did the artwork.  However, after Kimura died of cancer in December 2004, Urasawa claimed in an interview with weekly magazine Shuukan Bunshun in May 2005 that Kimura stopped work as a story writer due to a personal conflict with Urasawa at one point, after which Urasawa alone created both story and art.  Because of this, Urasawa demanded that Katsushika's name appear smaller than Urasawa on the manga's cover.  Manga story writer Kariya Tetsu, who was a close friend of Kimura and an influential figure in Shogakukan, opposed this action vehemently, which resulted in the discontinuation of the further publication of the comics as of July 2005.  This has since been overturned as the tankobans have been reprinted and Viz has gotten the rights to the manga in the using these new versions.

Now you may ask yourself Alc Fluteo why are you giving us a history lesson?  Well I’m going to be reviewing one of my favorite anime series of all time Master Keaton.  Since Viz just got the manga rights (so far Volumes 1 and 2 have been published) I will not be doing a review of the manga.  I’m much more familiar with the anime, especially its dub, and it will be the focus of my reviews.  Also the manga chapters are in an entirely different order than the anime episodes (save for the first episode and first chapter), as such it’s quite hard to compare and contrast both pieces of entertainment.


If you’re constantly looking for an anime series that’s far different from the norm, something historical, or based around people who don’t have super powers or feature moe characters I’d recommend Master Keaton.  Not only do you get intriguing tidbits of history from all over the world you also get interesting problem solving tips, survival techniques, a seemingly normal man being a total fucking badass, and a masterpiece of a series from a renowned mangaka.